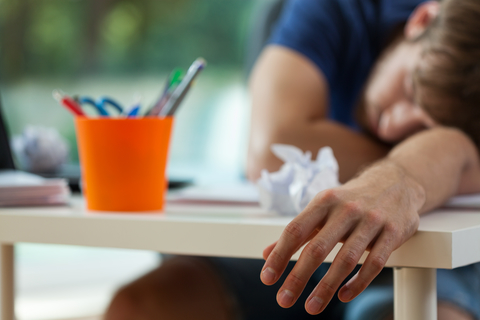 Going to college can be a wonderful experience for young adults: learning new stuff, meeting people, and developing their capabilities. However, keeping up with assignments, tests, and research work can take a huge toll on students. It can be much harder on those who deprive themselves of sleep not only to fulfill their academic responsibilities but for social affairs as well, turning college into a real-life nightmare.

Sleep deprivation is more frequent than we think among university students. It can have a big impact on their cognitive and physical performance as well as mood, mental health, and behavioral issues.

Studies show that teenagers need around 9-10 hours of sleep; however, as adolescents age they tend to stay awake about 90 minutes later at night than younger teens.
Having a bad night’s sleep severely affects memory and the ability to focus, as well as higher cognitive functioning. When a student stays up all night to study for exams, they are actually creating the perfect setting for a poor performance the next day.

According to the National Sleep Foundation experts have known for a long time that a person’s biological clock, also known as circadian rhythm, shifts forward during adolescence. Rather than feeling sleepy in the evening, teenagers tend to become more alert and have a difficult time settling into sleep mode. This is most likely due to melatonin, a neurotransmitter which causes sleepiness, being secreted later. In the morning, when people of other generations are awake and ready for the day, teenagers still have elevated melatonin levels and often feel groggy as a result.

Many teens also feel drowsy in the middle of the day, regardless of their sleep habits. As teenagers, the brain is still developing neural connections, especially to mature planning, abstract thinking, and organization skills.

Dr. Philip Alapat, medical director at the Harris Health Sleep Disorders Center, a certified facility by the American Academy of Sleep Medicine mentions: “Any prolonged sleep deprivation will affect your mood, energy levels and ability to focus, concentrate and learn, which directly affects your academic performance.”

The effects of poor sleep on student’s health

Lack of sleep also decreases immune system efficiency, leaving students defenseless against the variety of illnesses they are exposed to at school, resulting in missed school days and poor academic performance.

Following the same line, poor sleep habits can also generate a deficiency and affect physical activity. University students who don’t sleep well tend to feel more tired and weak, react slower, and even put up some weight than those who are well rested.

Adding to the problem, occasional all-nighters paired with caffeinated beverages like energy drinks, coffee, or tea put students at risk for developing insomnia. These same students also are at higher risk for alcohol abuse, depression, anxiety, and motor vehicle accidents. Let’s not forget about the concerning and rapid increase in smart and sleeping drug consumption.

According to William D. S. Killgore, Ph.D.’s research paper “Sleep deprivation impairs recognition of specific emotions” implies that chronic poor sleep can affect our ability to recognize emotional or facial expressions. This means that students might be too tired to acknowledge either positive or negative emotions in other people, making them prone to isolation and problems enjoying a healthy social life.

There is a complex relationship between sleep, depression, and anxiety. When people with any of these mental conditions were surveyed to determine their sleeping patterns, it turned out that the vast majority of them slept for only less than 6 hours a night.

People with chronic sleep problems, also known as insomnia, have greater levels of depression and anxiety than those who sleep regularly. They are ten times as prone to have clinical depression and 17 times more likely to have anxiety.

Is napping the answer?

After a rough day at school, a nap may sound like a wonderful indulgence, but naps can impact a student’s ability to sleep at night. Thought a nap could relieve some sleep deprivation from the night before writing an essay, it may be harmful if the individual already suffers from the onset of insomnia and make it even worse.

Naps that are prolonged more than 30 to 45 minutes or occurring close to bedtime can compromise a person’s ability to fall asleep at night. However, if you feel the need to nap taking a short nap (15 to 20 minutes) in the early afternoon is best. It will impact sleep patterns far less than a longer nap later in the day.

Recommendations for students to achieve a better sleep:

College is a crucial time and place for students to develop their cognitive and social skills at a deeper level as they enter adulthood. A sleepless night now and then is okay, but students must remember that sleep affects every aspect of their lives. Developing good sleeping habits is one of those things that come with growing up. It’s necessary to set one’s priorities straight and acknowledging that. Like Uncle Ben said to Peter Parker, with great power comes great responsibility.

Make sure you check out more great blogs at College Basics.